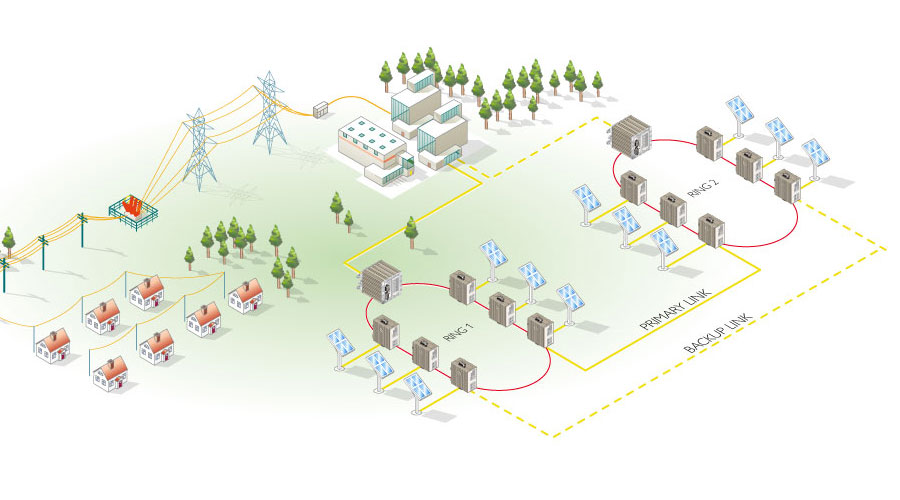 The need
Mission critical infrastructure networks and industrial applications must operate for 100% of the required time for the systems they connect. Sometimes this can mean 24/7 or just during the operation for which they are critical.  Stopped manufacturing lines, interrupted infrastructure services, and other system failures are unacceptable as they inevitably result in costs for the operator.
If a single network failure occurs it is often not possible to carry out immediate maintenance. An engineer may not be available or the operator may not risk stopping a system that is currently working to repair a broken cable.
The processes running on mission critical networks often employ protocols that cannot tolerate packet losses of more than a few milliseconds before registering errors. Network errors will sometimes force an expensive  process shut down.

Networking consideration
If all data on a ring network was directed to known devices then the address learning capability of Ethernet switches would allow rings of basic switches to be used. Unfortunately many protocols generate broadcast traffic that floods to all parts of the network to find its destination. If normal switches are configured in a ring this data will circulate forever in the network, multiplying until eventually the network overloads.
Special protocols exist like FRNT that ensure that these broadcast storms never occur in a ring network.  When a failure occurs this protocol must rapidly reconfigure the network to ensure the process can continue.
For ultra-resilience networks must sometimes tolerate more than one failure. One method of building a resilient network is to use routers that learn paths through networks and rebuild these as the topology adjusts. Unfortunately these protocols like OSPF, RIP and BCP tend to have relatively long reconfiguration times as they were designed more for wide area networks. The automation type data transport protocol  (Modbus, Profinet, EthernetIP) often employed in these networks were originally designed for local networks and tend to flag faults if the recovery time of the network is too slow.

The solution
FRNT is a layer-2 network ring protocol that ensuring reconfiguration time less than 20ms in large networks.  FRNT Ring Coupling enables you to connect two FRNT rings, a sub-ring and a super-ring, with multiple layer-2 uplinks. This Ring Coupling functionality ensures that one of the uplinks is always active, while the other is in backup state, thereby providing redundancy and loop-free connectivity.  It is also possible to set priority on the uplinks to ensure the fastest path when different medias are used for the uplinks.
The ring coupling protocol reacts to link loss as well as an echo response from the interconnected switches. The uplinks topology can also be extended to connect rings in a ladder or tree structure.
With FRNT and FRNT Ring coupling protocol it is possible to design a network with multiple rings based on layer-2 technology. This then ensures a resilient network with fast reconfiguration time to all nodes even though multiple network failures occurs.